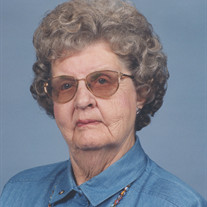 R. Kathryn Ostermayer, 95, of Mount Laurel, passed peacefully March 31, 2014. Beloved mother of Barbara Gee (Douglas), Ruth Conklin, and sons George III and David (Kathleen). Grandmother to Douglas Jr (Kara), Christopher (Kristen), Adam (Nicole), William (Nina), Audrey (Matt), Karl (Shannon), David Jr (Loraine), and Karly (Vincent), Great-grandmother to 14, and Aunt / Great-Aunt to many nieces and nephews. Her husband, George Jr., predeceased her in 1992 after 50 years of marriage. Kathryn was born in Reading, Pa on July 16, 1918. She was a graduate of St Luke’s and Children’s Hospital (RN 1940) in Philadelphia, and Trenton State College (BA 1968, MA 1973). She worked as an RN at many area hospitals, then joined the staff at Camden City Public Schools as a school nurse, first at several elementary schools and then at Pyne Poynt Junior High School. After earning her BA and teaching credentials, she became a special education teacher to the orthopedic / multiple handicapped class at Davis Middle School and later at the Skill Center. She retired in 1990, after 27 years of service to the district. She was an emeritus member of the Riverton Porch Club, and served as Treasurer for several years. She was a member at Saint Matthew Lutheran Church in Moorestown and at the Evangelical Lutheran Church of the Holy Communion in Philadelphia. She loved to travel, and took numerous trips with her many friends at the Riverton Fire Auxiliary. A memorial service is scheduled to be held on June 1st at 1PM at St. Matthew Lutheran Church. In lieu of flowers, contributions are requested for one of her favorite charities, the Shriner’s Hospital for Children (on line donations may be made at http://support.shrinershospitals.org/goto/RKO ) or to St. Matthew Lutheran Church (318 Chester Ave., Moorestown, NJ 08057).

The family of Reba Kathryn Ostermayer created this Life Tributes page to make it easy to share your memories.

Send flowers to the Ostermayer family.