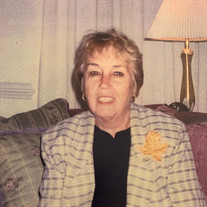 Regina Schmidt Thomson, in her eighty-seventh year, passed into the next life peacefully on December 8, 2019. She now joins family who went before: Husbands Coyle Herbert Willis and William F. Thomson; her mother and father; and six of her eight siblings. She is survived by her sons, Stephen (Luzia) Willis, Michael Willis from Montana, and James (Linda) Willis from New Jersey. She was lucky enough to have had five grandsons, Stephen Willis from Los Angeles, Bryce (Alesha) Willis from Billings, Montana, Wade (Kelsey) Willis from Missoula, Montana, and Daniel and Quinn Willis, from Moorestown, New Jersey. She always enjoyed talking about her childhood growing up in the multicultural neighborhoods of Camden, NJ. She fondly remembered her community of row homes where people sat on their front porches in the summer and socialized. She attended Saint Cecilia and Sacred Heart elementary schools in Camden. She graduated from high school in the class of 1951 from Saint Mary of the Angels Academy for Girls in Haddonfield, NJ. While attending high school she also worked various jobs which included a summer job at her Uncle’s luncheonette in Margate, NJ. That is where she learned to make her signature ice cream sundaes and ice cream sodas. She also enjoyed taking the trolley from Margate to Atlantic City to dance the jitterbug to the big band sounds of Tommy Dorsey. She became a career administrative assistant and office manager for most of her life. She married U.S. Marine fighter pilot Herb Willis in 1954 and together they raised their three sons while living in Pennsauken and Moorestown. Her family was her highest priority and while working full time she also provided loving care and guidance (and great ice cream sundaes) to her family. She always had a spirit for learning and her interests included solving crossword puzzles and watching challenging game shows such as Jeopardy. Her favorite music was big band era swing, and of course Frank Sinatra and Neil Diamond. Mom had a special place in her heart for those less fortunate than her, especially disabled children. She was a staunch patriot who loved her country and she contributed to numerous Veterans causes. She was a strong Roman Catholic and her Christian faith was a source of strength and comfort to her. She will be dearly missed by her entire family. She is with God and probably solving crossword puzzles and jitterbugging to big band era music. We love you Mom and Grand Mom and look forward to when we will be with you again in heaven. Memorial service Sat. Jan. 18th at the Lewis Funeral Home, 78 E. Main St. Moorestown, NJ. Visitation 1- 2 pm. Interment Private. In lieu of flowers, a memorial fund for Disabled American Veterans has been established. Contributions in Mom’s name can be sent to: DAV-Chapter 10, PO Box 20453, Billings, Montana, 59104.

Regina Schmidt Thomson, in her eighty-seventh year, passed into the next life peacefully on December 8, 2019. She now joins family who went before: Husbands Coyle Herbert Willis and William F. Thomson; her mother and father; and six of her eight... View Obituary & Service Information

The family of Regina Thomson created this Life Tributes page to make it easy to share your memories.

Regina Schmidt Thomson, in her eighty-seventh year, passed into...

Send flowers to the Thomson family.