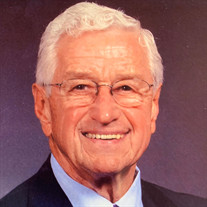 Richard “Dick” Carnwath Feaster – Obituary Richard “Dick” Carnwath Feaster died peacefully on October 3, 2019 at the age of 91. He is survived by his son Richard Jr. and his wife Jan of Dallas, TX, and daughters Holly (Feaster) Rose of Medford, NJ, and Jill (Feaster) LaPan and her husband Rodney of Haddon Township, NJ. The joys of his life were his six grandchildren, Jason Rose and his wife Erica, Chelsea (Rose) Furnas and her husband Matthew, Alyson Feaster, Meredith LaPan, Callie Rose and Scott LaPan, and a great-granddaughter Grace Virginia Furnas. His sister Nancy Cauley, sister-in-law Susan Feaster and 13 beloved nieces and nephews and their families also survive him. Dick was preceded in death by his loving wife of over 66 years, Doris (Happy) V. Kirsch, his brother Douglas M. Feaster and his sister, Janet F. Blew. Born in 1928, and raised in Elkins Park, Philadelphia, as the oldest of 4 children of Francis and Fanny Feaster, Dick graduated from Penn Charter High School in 1947 before attending Franklin & Marshall College. After graduating with a BS in Chemistry, he met the love of his life, Doris Kirsch and married in 1952, just prior to his deployment with the United States Marine Corp. to Korea for two years, and was released as a Major in 1954. After one year at University of Pennsylvania Medical School, Dick decided he was more suited for sales and went to work for Scott Paper Company in 1954. He became a sales manager working at various companies until he became President of P-H-P Graphics Arts Corp. then owner of Webb Manufacturing Company in Philadelphia where he remained for ten years. Dick had an entrepreneurial spirit and in 1979 he changed careers and began doing estate and financial planning along with life and health insurance sales for the remainder of his career. Dick’s professional and community activities included being a member of the Philadelphia Young President’s Organization (YPO), serving as a Trustee and President of the Alumni, Franklin and Marshall College. He served on the Board of Burlington County Boy Scouts & Girl Scouts, the Moorestown Improvement Association, as well as a Deacon & Trustee of First Presbyterian Church of Moorestown where he also taught Sunday school. Dick was also very proud to be a direct descendant of Feasterville, PA. Happy and Dick raised their family in Moorestown where they lived for over 40 years before moving to Medford Leas. They were avid golfers and played golf at courses all over the world, plus were members of the Riverton Country Club and Moorestown Field Club. Dick and Happy had season tickets to the Phillies for over 35 years and were thrilled by the World Series wins in 1980 & 2008! Dick and Happy loved traveling and were fortunate to have visited Africa, Australia, New Zealand, Europe, Hawaii and Alaska. They relished spending time with family and their extended group of friends at their home on Long Beach Island, NJ and while wintering in Bonita Beach, FL for over 15 years. Dick was an amazing body surfer who taught anyone who would brave the waves with him how to catch a good one! Dick loved talking and joking with people, making them laugh whenever he could, which he continued to do through the last nine years following a stroke, though he could no longer talk. The family wishes to extend a heartfelt thank you to all the kind and loving aides and nurses at Medford Leas as well as those with Samaritan Healthcare & Hospice. In lieu of flowers, we would appreciate donations to Samaritan, either online here, (https://samaritannj.org/giving/donate-now/) or by mail: Samaritan Healthcare & Hospice ,5 Eves Drive, Suite 300,Marlton, NJ 08053 Attn: Development Office A memorial service will be held at Medford Leas, Route 70 E, Medford, NJ on Saturday, October 19th at 12 o’clock noon in the Theater with refreshments following in the Holly Room. The family invites all who knew him to join them on the 19th to celebrate the life of Dick Feaster!

The family of Richard Carnwath Feaster created this Life Tributes page to make it easy to share your memories.

Send flowers to the Feaster family.