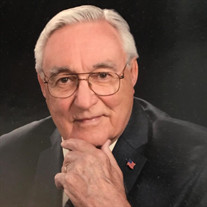 On Sunday evening, May 10, 2020, our father Robert (Bob) E. Holston passed away. He was 88. Dad was the strong, silent type - dedicated, honest, dutiful, and dependable. He was a rock and we could not have had a better role model. Dad was born in Philadelphia in 1932 and went to Drexel University where he earned three masters degrees (Electrical, Mechanical and Aeronautical Engineering). He married his first wife Margaret Whitiker when he was 23 and they raised their daughter Nancy and son Scott. After 7 years of marriage he tragically lost Margaret. He later married Pearl Marie Wertman and the family grew with the addition of sons David and Robert. They were married for 54 years, raise their kids, hosted big Christmas dinners, spent time with lifelong friends, traveled the world, and visited with their grandchildren. Dad was passionate about all things mechanical, especially if it had an engine in it and it flew, floated or rolled. As kids we visited every railroad within a 300-mile radius of our house. Early in his career he worked on the rocket propulsion systems for what would be part of the Mercury and Apollo missions. He worked for RCA/General Electric for 35 years leading teams on various NASA projects. His group was responsible for the communications on the Lunar Rover. He was a master woodworker and along with countless planes and ships he famously built a sprawling model train set up that started in what we called the Train Room. It quickly grew to fill the attic and then the basement. He did everything with a high level of precision and detail. He loved to share his hobby with the community and every Christmas he and mom would hold an open house for the all the folks in Moorestown. He would also occasionally tear down a wall or two in the house to do a little remodeling. Dad was a dedicated member of Trinity Church in Moorestown, ushering at Sunday services and assisting with the treasury. In later life he dedicated himself to taking care of mom when her memory started to go, making sure she had the best care and was safe. Dad was proceeded in death by Pearl Marie Holston and Margaret Whitiker Holston. He is survived by his four children, Nancy McAvoy, Scott Holston, David Holston and Robert S. Holston, and grandchildren Andy McAvoy, Cordy McAvoy, Stuart McAvoy, Stephanie Holston, Olivia Holston and Anna Maria Holston. He was admired, respected and loved. We will miss you Dad. Due to the present circumstances. Interment will be private. In lieu of Flowers Memorial contributions may be made to Trinity Episcopal Church, Church School program 207 W. Main St. Moorestown, NJ 08057.

On Sunday evening, May 10, 2020, our father Robert (Bob) E. Holston passed away. He was 88. Dad was the strong, silent type - dedicated, honest, dutiful, and dependable. He was a rock and we could not have had a better role model. Dad was born... View Obituary & Service Information

The family of Robert E. Holston created this Life Tributes page to make it easy to share your memories.

Send flowers to the Holston family.