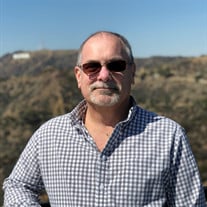 Robert James Murray, Jr. 3/18/61 - 2/4/2019 On February 4, 2019, after a 28 month battle with stage 4 colorectal cancer, Robert J. Murray, Jr. “Robb” received perfect healing when he went home to his Savior. Survived by his loving wife of 33 years Constance S. Murray (née Hare), his sons and daughters-in-law: Dr. Robert J. Murray, III & Dr. Calla Vodoor Murray of Philadelphia PA, Andrew D. Murray of Moorestown, Matthew D. Murray of Moorestown & Katherine Lodato of Cinnaminson, Anthony L. Phelps, IV & Andrea Mott Phelps of Dahlgren VA, and granddaughter Aubrey Lynn Phelps. Also survived by sister Deborah Bell (Tom) of Middletown NJ and brother Scott Murray (Nancy) of Howell NJ, brother-in-law William D.Hare (Stephanie) of Moorestown, sister-in-law Karen Hare Eder (Keith) of Riverside, father-in-law William H. Hare, Jr. of Moorestown, as well as many nieces and nephews, cousins, and close friends. Robb was the middle child of Robert J. Murray, Sr. & Barbara L. Murray (née Dawkins). He was raised in Wall, NJ where he was a cub scout, played little league, ran track, and played HS soccer. He played the trumpet in the Wall HS band and was the chief crew member of Tice Racing at the Wall Speedway. He attended Brookdale Community College, transferred to Trenton State College and in 1985 graduated with a degree in Technology Education. In 1986 he married his college sweetheart Conni Hare. Together they raised three boys, adding an adult child to their family after their boys had all graduated high school. A handy guy, with the help of family and friends, they completely renovated two houses - first in Maple Shade and then in Moorestown. He worked at two schools before landing at Lenape Regional High School where he taught for 30 years. He brought the video media program to Lenape High School and it quickly grew into the studio broadcast run by students. He taught video media technology, photography, digital photography, woodworking, electronics, technology today, and CAD. He treated his students with kindness and respect. He believed every student had value and that there were no bad kids, just good kids who sometimes made bad choices. Robb loved to hunt and target practice, but his favorite thing was spending time with his family. He coached his son’s sports teams all through school spending every spare minute with them on the soccer field, baseball field, lacrosse field, and on the side of the pool cheering them on when they swam for Sunnybrook Club as little guys. He was so proud of each and every accomplishment. He was a youth leader at church and an active teacher participant of the Fellowship of Christian Athletes at school. He was a great man who considered everyone extended family. He enjoyed woodworking and was always working on a project making furniture and home decor. In July 2015 he and Conni opened Barrel of Murray’s, LLC, an online store selling home decor made from reclaimed wine and whiskey barrels and shipping pallets. As things were just starting to really take off for them, he was diagnosed with stage IV rectal cancer already metastatic to liver and lungs. The chemo caused so many side effects that his woodworking was sporadic and the business slowed. He was hoping his sons and others would help to keep his dream alive after his passing into glory. Although Robb had always been a believer, it wasn’t until faced with death that he truly understood the promise of eternity through Christ Jesus. He and his wife Conni started writing a book about the faith journey they were on. Know that the final chapter is not a sad one. Although Robb’s earthly body lost the battle with cancer, he ultimately won the fight. The final chapter is a joyous one where Robb found perfect healing and ran into his Savior’s arms. Viewing Friday Eve 6 - 8 pm at the Cornerstone Church, 515 Mt. Laurel Rd. Mt. Laurel, NJ 08054. Funeral service Sat. 10 am at the church. Interment will be private. Robb specifically asked that people do not send flowers to his viewing or service. He said flowers are pretty for a time but they do no good in the world. He wanted people to donate to the Moorestown and Lenola EMS squads or the American Cancer Society for colorectal cancer research. Please be sure to designate your donation as a memorial contribution in his name so the family will be notified of your contribution. Lenola EMS Squad 229 N. Lenola Rd., Moorestown, NJ 08057 Moorestown EMS Squad 261 W. Main St., Moorestown, NJ 08057 American Cancer Society https://donate3.cancer.org/

The family of Robert J Murray Jr. created this Life Tributes page to make it easy to share your memories.

Send flowers to the Murray family.