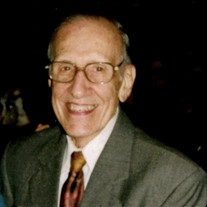 Robert W. Scheyhing (“Bob”) was born at home in Burlington City, NJ on May 11, 1926, and passed away at his home in Medford Leas on October 3, 2019. Bob grew up in the Farnerville section of Burlington City with his parents, Albert “Pop” Scheyhing, Helen Scheyhing (nee McCormick), and elder brother, Albert “Cub” Scheyhing. A life-long singer, at twelve Bob joined the Adult Choir at what is now the Broad Street United Methodist Church in Burlington. In 1943, Bob graduated from Wilbur Watts High School. A U.S. Navy veteran of World War II, and graduate of Drexel University in Philadelphia, Bob spent his career as an electrical engineer for RCA, primarily in Moorestown. While at RCA, he earned Master’s degrees from The University of Pennsylvania, and New Jersey Institute of Technology. In May of 1951, he met the love of his life, Nancy L. Braden, to whom he was married for over 61 years. They were parents of Bruce, Mark, Joyce, and Glenn, raising their family in Burlington and Moorestown. Before and after retirement, Bob and Nan traveled to places in Europe and the United States. In 1998, they flew half-way around the globe to Guam for the wedding of Glenn and dear daughter-in-law, Susan. Bob, Bruce, and Joyce sang at the ceremony. Bob was the proud Grandpop of Grace. Bob was a founding member, Charter Board member, and Member Emeritus of the Trustees of the Occupational Training Center of Burlington County. In 2018, the Robert W. Scheyhing Group Home in Evesham for adults with disabilities was dedicated in honor of his many years of service to the OTC. A member of over 60 years at the First United Methodist Church in Moorestown, Bob and Nan were active, dedicated members of the Missions Commission. Bob was an integral part of the music ministry at church, singing in the bass section of the Adult Choir, both as a member and as a soloist [including Bach’s St. Matthew Passion (Jesus), Elijah, Handel’s Messiah, Brahms’ Requiem, Dubois’ Seven Last Words]. At times, Bob also chaired the Music Committee, and entertained the Adult Choir with his hilarious, satirical musical routines at Choir banquets. He also sang in the Haddonfield Oratorio Choir/ New Jersey Master Chorale for a number of years. In 2001, Bob and Nancy moved from Moorestown to Medford Leas at Lumberton. In addition to exercising at the Health Center, Bob enjoyed volunteering, taking friends and residents in Assisted Living to therapy on Fridays. Bob also sang with the Medford Leas Singers. “Farmer Bob” also enjoyed working in his vegetable gardens. He was a 70-year member of the Brotherhood of Masons in Burlington. Bob had a life-long fascination with both locomotive steam engines and pipe organs. While still in high school, Bob kept a brief correspondence with world-renowned organist E. Power Biggs. Preceded in death by his parents and brother; wife, Nancy, and son, Mark B. Scheyhing, Bob is survived by children, Bruce, Joyce, Glenn, daughter-in-law, Susan, and granddaughter, Grace. We are deeply grateful for the loving care the staff of Medford Leas gave to both our parents (Nancy passed away there in 2013). We also thank Samaritan Hospice for helping to ease Dad’s transition in his final days. Robert’s memorial service will be at 11:00 a.m. on Tuesday, October 8, 2019, at the First United Methodist Church of Moorestown, NJ, 446 Camden Avenue. Choir rehearsal will begin at 10:00 in the Choir Room of the Susan D. Rodgers Music Ministry Building for those who wish to sing; Interment at Lakeview Memorial Park in Cinnaminson will be private. No flowers, please. Instead, the family invites you to make a donation to the Memorial Fund of First United Methodist Church, Moorestown, or to the Residents’ Fund of Medford Leas. Condolences may be left at www.lewisfuneralhomemoorestown.com

The family of Robert W Scheyhing created this Life Tributes page to make it easy to share your memories.

Send flowers to the Scheyhing family.