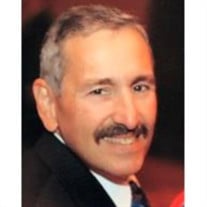 Ronald Errigo Sr. of Pennsauken, NJ. On January 30, 2022 age 70 years. Ron was a longtime resident of Pennsauken and a graduate of Pennsauken High School’s class of 1970. He was a loyal brother of the Mill & Cabinet Union, Local #252 for almost 50 years, over 35 as a cabinet maker; spending most of his career with Dimensional Studios and Maltbie Exhibits (now Kubik Maltbie). Ron was a proud member of the Delran Jr. Marksman Club, where he volunteered as a Range Officer and the Maple Shade Sportsman Club where he also served as a Range Officer and Executive Secretary. In his earlier years, as he raised his family, Ron could always be found on the sidelines coaching championship Pop Warner football teams for St. Peters Football or lending his supportive voice to the hundreds of Pennsauken youth that he became a valued mentor to as a PYAA Little League Baseball coach. Among the many friends and family that he was always available to lend a hand to, Ron spent his later years as the loving caregiver to his mother and father. Ron has positively touched so many lives and will be remembered for his unconditional love by so many, most notably his loving wife of 50 years and high school sweet heart, Deborah (nee Perozzi); the apples of his eye, his children, Valoree Albert and son-in-law David, Ronald Errigo Jr. and daughter-in-law Beth and Bill Errigo and daughter-in-law Leslie. His sister Cynthia Meidt and her husband Matthew, his brothers Alfred Errigo Jr and wife Tammy, Jerry Errigo and wife Susan and Rick Errigo. His grandchildren, known so affectionately as his sweetie-peas; Samantha, Taylor, Courtney, Faith, Ronald III., Olivia and Simone and so many nieces, nephews, cousins and friends that Ron loved like his own. Viewing Thursday eve 6- 8 pm at the Lewis Funeral Home, 78 E. Main St. Moorestown, NJ. Mass of Christian burial 11 am Friday Feb.4th 2022 at Mary, Queen of all Saints RC Church, (Formerly St. Cecilia) 4824 Camden Ave., Pennsauken, NJ. In lieu of flowers memorial contributions may be made to a Go fund me to Benefit the Wildwood Naval Air Station Museum at https://www.gofundme.com/f/in-loving-memory-of-ronald-alfred-errigo-sr

Ronald Errigo Sr. of Pennsauken, NJ. On January 30, 2022 age 70 years. Ron was a longtime resident of Pennsauken and a graduate of Pennsauken High School&#8217;s class of 1970. He was a loyal brother of the Mill & Cabinet Union, Local #252... View Obituary & Service Information

Send flowers to the Errigo family.