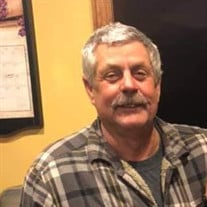 Ronald (Ron) Stephen Gorbe, Sr. passed from this world on Friday, October 30, 2020, surrounded by his loving wife and family. Ron was born in Perth Amboy, New Jersey and grew up in Waretown, New Jersey, later moving to Riverside, New Jersey where he and his wife, Dawn M. (nee Stellwag), raised their family. To say Ron was one of a kind was an understatement. His gruff exterior was always followed by his kindness and compassion for others. He had a nickname for everyone, and you knew you were forever his friend when he gave you that special name. Even though he had a long commute every day as a union ironworker all over New Jersey and into New York, you could always find him making his rounds down Bridgeboro passed St. Peter’s Cemetery to see if the boys were there to stop and chat, through downtown Riverside, over to Cambridge and Delcrest before coming home to his family. He always had time to help family members, friends, neighbors, or even a stranger. Saltwater was in his blood and he enjoyed going fishing with his buddies spending hours out on the ocean. Sometimes coming back with dinner and other times empty handed but just being on the ocean made him happy. He was an excellent woodworker making furniture and other items for family and friends. Weekends you could find him outside doing yardwork and ending the day grilling on the deck, listening to music and watching the cardinals and hummingbirds. He loved to watch the grilling/barbecue shows and looking through his endless collection of grilling cookbooks to find the perfect recipe. His favorite holiday was Halloween, and he would spend the month before working on his Halloween display in the front yard. His family was his pride and joy. Everything he did was for them. He cherished the times when the family got together and enjoyed watching his grandkids play. Drinking beer and playing washers were a staple during the summer and it was not a Gorbe family get together without a little playful sarcasm and busting on each other. A graduate of Southern Regional High School, Manahawkin Ron worked hard to provide for his family and never shied away from the more dangerous jobs first as a commercial fisherman out of Barnegat Light before finding a career as an ironworker and welder building bridges. He was most happy with his career when he became at age 58 a journeyman for Iron Workers Local 399 working out of Local 11 in North Jersey. He truly found his place when he began working with Joseph M Sanzari in the Fall of 2017. He often said it was his dream job and he felt like part of a family with his fellow union ironworkers. Life became a roller coaster when Ron was diagnosed in February 2018 with lung cancer that after surgery and repeated chemo and radiation spread to his brain in November 2019. Brain surgery and gamma knife followed but focal seizures became a part of his everyday life and he was forced to stop working. Through all of this he remained optimistic. He felt everyday was a blessing and Thanked God for allowing him another day. Ron said it best the evening before he died—every story has an ending and I think my story has reached its end. He is survived by his loving wife of 36 years, Dawn M. (nee Stellwag); daughter Danielle Trout and her husband, Keith, daughter Sarah and partner Zachary Harrison, son Jakob and partner Alyssa Ternay; cherished grandchildren, Payton, Hailey and Travis Trout, and Elaina Gorbe. Also survived by sisters, Debbie Beckwith, Sharon Young (Eric), Lynn Gorbe (Ron Haklar), and Darlene Tardiff (Todd) and stepmother, Carline Gorbe; as well as brothers and sisters in law, Andrew Stellwag (Christine Lammers), Joseph Stellwag (Helen), Lawrence Stellwag, Sr. (Denise), Beverly Russell (Joseph) and many nieces, nephews and cousins. Ron is predeceased by his son, Ronald Stephen Gorbe, Jr., his father—Stephen Gorbe, his mother--Lois Gorbe (Christensen), father-in-law and mother-in-law--Andrew & Eleanor Stellwag, sister-in-law, Marianne Stellwag, and niece, Angela Stellwag Viewing Wed. eve. 6- 8 pm at the Lewis Funeral Home, 78 E. Main St. Moorestown, NJ. Mass of Christian Burial Thurs. 10 am at Jesus, the Good Shepherd/St. Joseph's Church, 805 Warren Street Beverly, New Jersey 08010. Mask, Social distancing and Covid restrictions will be in place at funeral home and church. Interment Lakeview Memorial Park, Cinnaminson, NJ. In lieu of flowers. Memorial contributions may be made to Samaritan Hospice, 3906 Church R., Mount Laurel, NJ 08054. https://samaritannj.org/giving/donate-now/ or MD Anderson Cancer Center at Cooper

Send flowers to the Gorbe family.