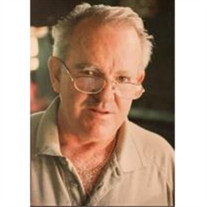 Samuel George Hocking, of Cape May NJ, passed away in his sleep, peacefully, and with his family nearby, on Saturday, February 6 th, 2021. George was born to Samuel and Elizabeth (Baxter) Hocking in Barrington, NJ on June 12, 1942. George later moved to Moorestown NJ and graduated from Moorestown High School, lettering in both football and track. While attending Moorestown HS, George met the love of his life, Dale Ellis. George and Dale courted their senior year at Moorestown, and continued dating during their time away at college. After graduating in 1961, George attended Bob Jones University in South Carolina, while Dale attended Southern Seminary College in Virginia. After one year of college, both Dale and George returned home to Moorestown, and were married a short while later in 1963. George’s love for Dale was too strong, and he had to return home! This was the beginning of a wonderful and loving relationship. After spending time in Moorestown, Dale and George moved to Medford, NJ, where they would raise four amazing children together: Loren (Gary), Shelley, Kevin (Amy), and Ashley. George also leaves behind three beautiful granddaughters: Kayla Grace, Olivia Nevaeh, and Zoe Rose. George was preceded in death by sisters, Janice and Betty Mae. After 50 years in Medford, Dale and George moved to Cape May, NJ. George was an incredibly hard worker and was never one to sit around for long. In college, he was a part time mailbox painter. Back in Moorestown, George was a sheet metal fabricator, and moonlighted as a landscaper in Medford Lakes, a business he owned. Eventually, George would go on to own both the fabrication business, as well as an annual flower business (you may have heard of Hocking’s Flowers). Hocking’s Flowers was a mainstay in Medford for over 40 years; people still drive by their old Victorian house on Rt. 541, looking to make a purchase. Ask any of the Hockings, and they’ll have a funny story to tell about the many days and nights spent either on the lawn, at the greenhouses, or having lunch under the tree. When the plants were young seedlings, Dad was known to check the heaters in the greenhouses at 2 or 3 AM each day, just to make sure they were running. Never one to leave early, Dad was always dedicated to his craft. Married for over 57 years, Dale and George had many adventures together. They cooked (Dad made the Caesar salad and the cosmos), traveled the country & abroad (about 30 states and 10 countries), skied, swam, laughed, cried, danced (go Jorge!, go Jorge!), ice skated, and just about everything else together. They were partners for life – true high school sweethearts. They even worked together and got along superbly. Not many couples can say that! Dale and George were both loved and admired by everyone they met. It’s hard to tell George’s story without mentioning his two favorite passions: fishing and gardening. You name it – George has fished for it: crabs, shrimp, tuna, flounder, striper, marlin, and shark. Whether it was in a tournament 40 miles offshore, or in a local bay, George LOVED being on the water with a fishing rod in his hand. He’d strike up a conversation with anyone who’d listen, and talk about his last fishing trip, or the new boat by the docks, or the best place to catch flounder in Cape May. Dad even founded the Cape May Marlin Tuna Club, which gave him an opportunity to spend even more time fishing! When dad wasn’t fishing, he was busy gardening. It didn’t matter the location either; if you had 15 yards of mulch to spread, dad was there with his rake, ready to help. Need rhododendrons or azalea’s planted? No problem – Dad had you covered. FYI, George and his dad used to grow them both many years ago. Sure, dad enjoyed his many hunting trips with his friends, but that was only when he wasn’t fishing or gardening! George was one of a kind. He was generous and easy going, and loved life. He always stressed doing the right thing for people, and worked hard to provide the best possible life for his family. And he did it with a smile! If you close your eyes and listen closely, you can still hear George say, “Life is good!” As long as he had his family, his friends, and his fish, Dad was good. Services and Interment Private. In lieu of flowers. Memorial contributions may be made to Alzheimer's Association Delaware Valley Chapter, 100 N 17th St, Philadelphia, PA 19103 , https://www.alz.org/

Samuel George Hocking, of Cape May NJ, passed away in his sleep, peacefully, and with his family nearby, on Saturday, February 6 th, 2021. George was born to Samuel and Elizabeth (Baxter) Hocking in Barrington, NJ on June 12, 1942. George... View Obituary & Service Information

The family of Samuel G Hocking created this Life Tributes page to make it easy to share your memories.

Samuel George Hocking, of Cape May NJ, passed away in his sleep,...

Send flowers to the Hocking family.