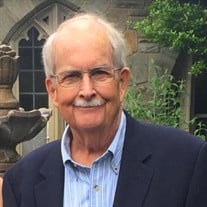 Dr. Samuel E. Lippincott, age 79, of Moorestown died in Virtua hospital Marlton on April 6, 2020. Sam grew up in Burlington, NJ. Influential in his life was the family-owned Lippincott Hardware Store on Broad Street. Lippincott’s, started in 1854 by Sam’s great, great-grandfather Charles Lippincott, was a local gathering place for politicians and residents until it was sold in the 1970s. Sam’s father told the family that it was the second oldest hardware store in the state that had remained in one family. After graduating from Burlington High School in 1959, Sam attended Ursinus College in Collegeville, Pennsylvania. He then went on to obtain his Doctor of Dental Medicine degree from the University of Pennsylvania School of Dental Medicine. His postgraduate education included a specialty in Prosthodontics at the University of Texas Dental Branch in Houston; an oncology fellowship at the University of North Carolina in Chapel Hill; and a year-long training program in Maxillofacial Prosthodontics at The University of Texas M. D. Anderson Cancer Center. He began his dental career teaching dental students at West Virginia University School of Dentistry in Morgantown. In the 1980s he was the Chief of the Dental Service at the VA Hospital in Wilmington, Delaware. Subsequently he returned to his passion of teaching at the University of Pennsylvania School of Dental Medicine and at Temple University School of Dentistry, from which he retired early in 2005. For years Sam had extensive health issues, including 13 years on kidney dialysis. But he never complained and was always a happy person. He had numerous hobbies, and when health constraints forced him to give up one hobby, he would develop two more. He liked running and exercising, was an avid sailor, played the guitar and sang. He enjoyed reading, operating a ham radio, collecting (everything), woodworking, building furniture, exploring nature, studying history and astronomy, doing magic and following all sports. As a child, Sam was very active at St. Mary’s Episcopal Church in Burlington. After moving to Moorestown, he joined Trinity Episcopal Church and served as a vestryman. He volunteered with the Red Cross. He was a past Head of the Rutgers University Field Hockey Parents Association, enthusiastically supporting his daughter, Rebecca, and her teammates during her field hockey career. Sam was humble, kind, smart and funny. He especially was known for his quick wit and great sense of humor. He enjoyed telling jokes, pranking (like filling a pickle jar with silicone noses) and making people laugh. If you knew him, you would know that his many words of wisdom included: you can never have enough storage bins; always ask for more napkins; and drive like you have a tomato under your gas pedal and an egg on your hood. Anyone who knew him loved him, and they never forgot him. He was predeceased by his parents, Thomas Birch Lippincott and Dorothy Turner Lippincott. He is survived by his wife Shelley of almost 48 years, whom he met in Houston, and in marriage transplanted her from her beloved Texas; his daughter Rebecca Celhar and husband Brian, grandson Finn and granddaughter Liev; his sister Susan L. Hughes, niece Kara Schmidt and husband Damon and their children, Dylan and Eliza; nephew John Hughes and wife Renee and their children, Jonathan, Owen and Nolan; and countless friends and family by marriage. Due to the present circumstances private burial was in Trinity Episcopal Cemetery. A public service will be planned at a future date. Memorial contributions to: Trinity Episcopal Church, Book of Remembrance ,207 W. Main St. Moorestown, NJ 08057 or Woodford Cedar Run Wildlife Refuge 4 Sawmill Rd, Medford, NJ 08055