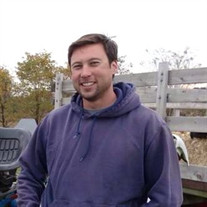 Seiji Harold Moriuchi Moriuchi, Seiji H., age 35, of Moorestown, NJ, died suddenly, but peacefully in his sleep on Monday, June 30, 2014. Son of Fred and Caroline (née Brunt) Moriuchi, Seiji was born on Father’s day and was a longtime resident of Moorestown. He grew up on the family farm off of Borton Landing Road, graduated Moorestown Friends School in 1998 and attended college. As a student at Moorestown Friends School (MFS) he developed integrity and made life-long friends. He played soccer, basketball and baseball at MFS and was captain of both the baseball and soccer teams. In addition, Seiji received the Herm McGee Award which is given to the male and female athletes who have made the most significant contribution to MFS athletics during the school year. After attending college, Seiji returned home to pursue his life’s work on the family farm; his passion was farming. He had a gift for raising produce like his paternal great grandfather, Heijiro Moriuchi, and maternal grandmother, Janet Brunt. He started working on the farm as a little boy and as the owner of M&M Farm, Garden and Mulch worked side-by-side with his father, Fred Moriuchi. They raised and sold tens of thousands of mums, over 100,000 cubic yards of mulch and countless fruits and vegetables. More importantly, Seiji forged hundreds of meaningful relationships with employees, customers and suppliers. Seiji could meet people from every walk of life and make them feel comfortable. In the off-season, Seiji assisted Doug Fitzgerald with his property management company and, over the last seven years, served as the Assistant Boys Varsity Basketball Coach to Denny Earl, Ryan Winkelspecht and Colin Haynes. As a coach he was able to impact the lives of many young scholar athletes at MFS. Several of these young men he coached would work on the farm growing annual and perennial flowers and tending the farm market. Seiji H. Moriuchi is survived by his parents Fred and Caroline (née Brunt) Moriuchi. Brothers Takashi (Mey-Yen) Moriuchi and Naoji (Michelle) Moriuchi and Sister Akemi Moriuchi. Also surviving are his nephew Kenji and nieces Miya, Mina and Naomi. Several Aunts, Uncles, Cousins and grandmother, Yuri Moriuchi. He is predeceased by his loving grandparents T. Bayard Brunt, Jr.. & Janet W. Brunt and Takashi Moriuchi. Visitation Friday Eve, July 11, 2014 from 6-8 pm at the Lewis Funeral Home, 78 E. Main St., Moorestown, NJ. Memorial service 10:30 am on Saturday, July 12, 2014 at the Moorestown Meeting House, 118 E. Main St., Moorestown, NJ. Interment Friends Cemetery, Moorestown, NJ. In lieu of flowers, the family requests that memorial contributions be made to the Seiji Moriuchi Scholarship at Moorestown Friends School, 110 E. Main St. Moorestown, NJ 08057.

The family of Seiji H Moriuchi created this Life Tributes page to make it easy to share your memories.

Send flowers to the Moriuchi family.