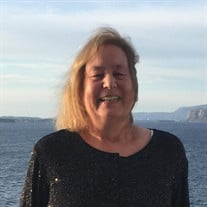 Teresa “Terri” Sedlacek passed away unexpectedly at her home on October 21, 2021. Terri was born May 12, 1950, in Philadelphia, PA, and would hate that everyone knows her age now. She grew up in South Philadelphia with her parents John and Anne (Janowiak) Zimmie, and sister Jo Anne. Terri knew from a young age that she wanted to be a nurse and worked for decades at hospitals in Philadelphia and South Jersey, as well as time as a hospice nurse and a volunteer parish nurse. While working in Philadelphia, she met her husband, the late Thomas V. Sedlacek, MD. They were married for nearly 20 years before his death in 2000. Prior to Tom’s death, he and Terri traveled extensively, a hobby she continued with their daughter Lori – some of her recent favorites were a cruise of the Norwegian fjords in 2016 and a long weekend in Puerto Rico in 2019. Terri was extremely close to her daughter Lori, talking on the phone twice daily and having brunch together regularly on the weekends. Terri was a warm and gregarious person who would strike up a conversation with anybody. She loved running errands because she could talk to the cashiers and would often relay their conversations in her nightly chats with Lori. Terri is survived by her daughter, Lori Sedlacek; her sister Jo Anne Zimmie and brother-in-law Anthony Ciampoli; nephew Christopher Ciampoli; and her dear cousin and godmother Catherine (Janowiak) Krammer (with whom she also spoke daily). Terri is also survived by her many friends who were like family to her, who will not be named individually so as not to inadvertently exclude anyone. In lieu of flowers, memorial contributions may be made to the Seeing Eye (https://www.seeingeye.org/) as Terri often spoke fondly of her time fostering puppies for them; or any other charity of your choice. While Terri’s death was not Covid-related, she would also ask that everybody get vaccinated if they have not already, as she was appalled by its effects. Funeral service will be held 10:30 am Wednesday at the Lewis Funeral Home, 78 E. Main St., Moorestown, NJ. Visitation from 9:30 to 10:30 am at the funeral home. Interment Presbyterian Cemetery, Moorestown.

Teresa &#8220;Terri&#8221; Sedlacek passed away unexpectedly at her home on October 21, 2021. Terri was born May 12, 1950, in Philadelphia, PA, and would hate that everyone knows her age now. She grew up in South Philadelphia with her parents... View Obituary & Service Information

Teresa “Terri” Sedlacek passed away unexpectedly at her home...

Send flowers to the Sedlacek family.