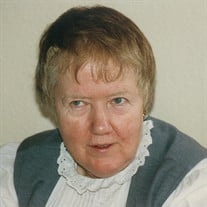 Ursula Solek 7/2/33-4/1/2018 Ursula Solek was born in Frankfurt July 2, 1933. Hitler took power in 1933 and she grew up in Germany during World War II. The family moved to the Black Forest when she was young to avoid most of the fighting and bombing in Germany. Her mother and father believed strongly in education and she and her two sisters were sent to school in spite of the war. Ursula was an excellent student and loved learning all her life. She especially loved Latin and learning other languages. In 1954 she met her husband, Ed Solek, an enlisted man in the U.S. Army at the USO in Frankfurt. They were married in Frankfurt and made the transatlantic trip by ship to Newark, New Jersey. Ursula had three children with Ed: Susan, Betty, and Bob. Two of the children were born in Newark, NJ and the youngest, Bob, was born in Maple Shade, NJ. She was married for about eight years, and then separated and eventually divorced from Ed Solek. Betty is the sole survivor of this family. Ursula's sister and her daughter live near Frankfurt, Germany. She moved to Moorestown, New Jersey with her three children and lived at Second and Union Street in Moorestown, NJ for 40 years. After she got to Moorestown she became involved in welfare rights organization. Someone recognized her skills and talent as a potential lawyer during those organizational efforts. She returned to college, got her college degree at Rutgers and then went on to Rutgers Law School. During her time as a college student, she taught German at Friend's School in Moorestown. After graduating from Rutgers Law School, she was registered with the New Jersey bar and practiced law until her retirement. She worked for the State of NJ Public Defenders office and subsequently in her own law practice. She won a family law case before the NJ Supreme Court. Ursula was a part of a number of churches in Moorestown, including the Quaker meeting and Baptist and Presbyterian churches. She found a long time home with the Unitarian church community in Cherry Hill. Her father was a journalist and writer over his lifetime. She was also a talented writer and had an interest in writing poetry. Her poem "What, finally, shall we say?" Can be found with a web search. Donations in her name can be made to Pinelands Preservation Alliance (pinelandsalliance.org) or Unitarian Univeralist Faith Action of NJ (UULMNJ.org). Memorial gatherings are private. Contact Betty Solek ([email protected]).

Ursula Solek 7/2/33-4/1/2018 Ursula Solek was born in Frankfurt July 2, 1933. Hitler took power in 1933 and she grew up in Germany during World War II. The family moved to the Black Forest when she was young to avoid most of the fighting and... View Obituary & Service Information

The family of Ursula I Solek created this Life Tributes page to make it easy to share your memories.

Ursula Solek was born in Frankfurt...

Send flowers to the Solek family.