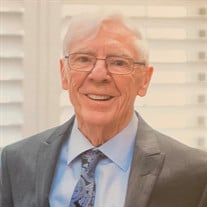 Walter (Walt) Anthony Trommelen, Jr. died peacefully in Moorestown, NJ on June 27 at the age of 82 after a long struggle with Alzheimer’s disease. Walt is survived by his wife of 42 years, Karen, his sons Robert (Catherine), David (Maria), Paul (Katie), and daughter, Rachel Wellons (Brad).. He also leaves nine grandchildren, four great-grandchildren and many nieces and nephews. He was preceded in death by his parents, Walter and Bernadine Trommelen, and by his sister, Marie Swakopf (Donald) and brothers, Roger Trommelen (Barbara), and Gary Trommelen. Walt was born on September 20, 1936 at home in Prospect Park, NJ. Walt spent his youth in Nutley, NJ where he worked alongside his father in the family business, Homestead Dairy. After graduating from Rutgers University College of Agriculture, New Brunswick, NJ with a B.S. Dairy Administration 1958, Walt began his professional life with Sealtest Foods and Millside Farms. But longevity in the milk industry was not to be. Walt began his public health career by joining the NJ State Department of Health in 1963. The next logical step was to attend the University of Pittsburgh, graduating with his MPH (Master in Public Health) in 1967. In 1971, Walt made the move to the Burlington County Health Department where he served as the County’s Public Health Coordinator for 31 years. As Chief county health administrator, Walt was responsible for planning, development, and management of public health activities consisting of human services, substance abuse services, planning and administration; a broad range of environmental health services; health promotion; maternal and child health services; communicable and chronic disease control services. Over his long career in Public Health, Walt served as President of the NJ Public Health Association, President of the NJ Health Officers Association, and as a frequent advocate of public health funding at NJ State budgetary hearings. In 1993, Walt was recognized by the NJ Health Officers Association with the Frank J. Osborne Memorial Award for exemplary service in the Public Health arena. Walt was extremely proud of this military service, having joined ROTC while at Rutgers and serving in the Army National Guard from 1958 - 1969 when Walt reluctantly resigned his commission as Captain. Never one to sit still, Walt served as an active volunteer both while working full time (American Red Cross, Philadelphia EMA/HIV Commission, Local Advisory Board South Central Health Planning Council, Health Visions), and upon his retirement from the Health Department (Board of Trustees Planned Parenthood of Southern New Jersey, Chairman STEM (Save the Environment of Moorestown) among many other volunteer activities. Walt was generous and hospitable. Once you walked in his home, he couldn’t wait to offer you something to drink or some ice cream. Walt enjoyed traveling, working outdoors, and collecting milk bottles. Walt was able to be the first one to laugh at himself and would happily repeat stories of his “incompetence”. His infectious laugh was a pure delight to hear. Walt seldom had a bad thing to say about anyone and as one of his friends opined, “Walt was just about the most perfect person I know”. Even after Walt’s dementia started to rob him of memories and abilities, Walt participated in a drug study to help others who had been similarly diagnosed. All are welcome to share in the celebration of his life 10:00 am on Monday, July 1st at Lewis Funeral Home, 78 East Main St., Moorestown. Visitation 9 – 10 am at the funeral home. In lieu of flowers, donations may be made in Walt’s memory to the Walter A. Trommelen Scholarship Endowment at Rowan College at Burlington County, 900 College Drive, Mt. Laurel, NJ 08054, New Jersey Chapter, Alzheimer’s Association, 3 Eves Drive, Suite 310 Marlton, NJ 08053, or to Planned Parenthood of Northern Central and Southern New Jersey, 196 Speedwell Ave., Morristown, NJ 07960.

Walter (Walt) Anthony Trommelen, Jr. died peacefully in Moorestown, NJ on June 27 at the age of 82 after a long struggle with Alzheimer&#8217;s disease. Walt is survived by his wife of 42 years, Karen, his sons Robert (Catherine), David (Maria),... View Obituary & Service Information

The family of Walter A Trommenlen Jr. created this Life Tributes page to make it easy to share your memories.

Send flowers to the Trommenlen family.