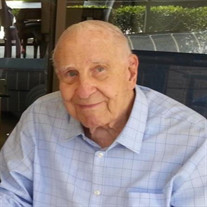 Warren E. Poth Obituary March 6, 1925 – April 23, 2020 Warren passed into new life in our Lord Jesus Christ on Thursday, April 23, 2020 at 5:25 A.M. He recently celebrated his 95th birthday with family and friends in March at his residence in Care One at Moorestown, N.J. Warren is survived by his daughters: Ave Maria Walwark, Paula Mazur and Mary Wichert; his son-in-laws: Thomas Walwark, Richard Mazur, Joseph Wichert and Ted Layman; his grandchildren: Jon Mazur and wife Laurie Hannan-Mazur, Jennifer Madama and husband Josh Madama, Patrick Wichert and wife Liz Wichert; his great-grandchildren: Courtney, Jon II, Maximilian and Alexandra; his sister Dorothy Gifford and his brother Robert Poth, many nieces and nephews and his goddaughter, Nancy Mae Conte. Warren is predeceased by his wife, Ave Maria C. Poth and children, Paul Poth and Maureen Layman. As a member of the “greatest generation” Warren served honorably in the United States Army during World War II in France, Belgium and Germany. At the close of the war he returned to his birthplace, Buffalo, New York where he earned his Chief Stationary Engineer license. Subsequently he would enter the employ of Sisters Hospital, Buffalo, New York and later, Liquid Carbonic where he eventually was transferred and promoted to plant manager of an air separation plant in Harrison, New Jersey and established a home with his family in New Monmouth, New Jersey. Years later Liquid Carbonic would invite him to run their new plant in Burlington, New Jersey. After Warren accepted the position he moved with his family to Mount Laurel, New Jersey and lived through to retirement with his wife. Warren was an active parishioner of Our Lady of Good Counsel in Moorestown, New Jersey for over fifty years. Together with his wife, he participated in the life of the church with joy celebrating the sacraments. In their role of Eucharistic Ministers Warren and his wife, Ave Maria regularly brought Holy Communion to the residents of the Evergreens Nursing Home, Moorestown, New Jersey. Warren was a committed member of the Burlington Kiwanis and served as its president for two consecutive terms. He also represented Liquid Carbonic on the South Jersey Industrial Safety Council. Throughout his life he pursued many interests including but not limited to bowling, crossword puzzles, playing pool, pinochle, The Lawrence Welk Show, growing tomatoes, woodworking, traveling, and wine making. After retirement Warren demonstrated his creativity as a stained glass artisan and with Ave Maria, his wife, introduced others to the enjoyment of creating works in stained glass at the Mt. Laurel Senior Center. All the while he continued to be a loving, caring, generous husband, father, grandfather and neighbor. Warren spent the last two years enjoying the love, care and support of his family, friends and his new Care One family where he earned the name, “candy man”. Interment was in the Brigadier General William C. Doyle Veterans Memorial Cemetery; Wrightstown, N.J. Due to the current coronavirus pandemic there will be no services as this time. Warren’s favorite charity was St. Jude Children’s Research Hospital and so in lieu of flowers a donation to St. Jude in Warren’s name is appreciated.

The family of Warren E Poth created this Life Tributes page to make it easy to share your memories.

Send flowers to the Poth family.