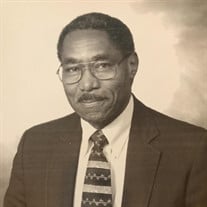 Wilbert Edward Armstead, Jr., best known as Ed, was born on June 23, 1934 in Baltimore, Maryland to Mary Josphine Armstead (nee Hill) and Wilbert Edward Armstead, Sr., the first of their five children. Ed graduated from Frederick Douglass High School in Baltimore, Maryland, in 1951. Ed was bright, having skipped two grades in school, and wanted to attend the University of Maryland to design airplanes. When the University of Maryland would not accept Ed, as a black student, they paid for him to attend the Johns Hopkins University in Baltimore, Maryland where he earned a Bachelor of Science in Engineering Degree in Electrical Engineering in 1955. After graduation, he moved with his wife, Shirley and his two girls, to New Jersey where he began his extensive career with the Radio Corporation of America (RCA). Ed and Shirley first lived in Lawnside, NJ and began to grow their family. Ed’s family was one of the pioneering homeowners of Blaise Ravikio’s development, built especially for black middle-class families, on Farmdale Road. The New Jersey Armsteads (as they were known among family) grew to include six girls. Ed was an excellent example of an involved and active citizen in the Moorestown community. Ed was an active member of Our Lady of Good Counsel (OLGC) Church, faithfully counting money on the third Sunday, for many years. He was also a member of the Moorestown Township School Board for 17 years, ultimately serving as president for several years. Ed served on Burlington County Girl Scout Council as a Trustee, on the Board of Directors of Family Services of Burlington County, on the Moorestown Improvement Association as President, Vice President of the Burlington County Association of New Jersey School Board, and tutor with the Moorestown BOE Project Help. He was honored by the Moorestown Service Club Council as a 1999 Citizen of the Year. Ed’s career in RCA Moorestown, spanned over 50 years, until his retirement in 2007. He worked in the same buildings although the corporate name changed from RCA, to GE, to Martin-Marietta to Lockheed Martin. He especially enjoyed his work in the Combat System Engineering Development Site (CSEDS) and his earlier work with radar installations on Ascension Island. Moorestonians of the 1960s and 1970s will recall the Armstead ‘family’ car which was a Citroën Safari wagon. We still are trying to figure out how Ed got Shirley to agree to that! Ed was a member of the Citroën Car Club, and was awarded a silver cup at the New Hope Auto Show. Ed developed a love for running as a means for fitness. He enjoyed running marathons into his 60s, and developed many long lasting friendships with his running buddies. In his 70s, and 80s, Ed continued to pursue fitness by walking throughout the community, and working out at the YMCA until just a year ago. Ed also enjoyed bowling in the MRA Mixed Bowling League from which he received the Bob Neely Sportsmanship Award for 2018-2019. He is survived by his wife, E. Shirley (nee Cole), daughters Barbara, Valerie (Michael), Patsy, Cookie/Joann (William), Jeri (John) and Angie (Sherman); grandchildren Cassandra (Cleo), Penelope, Veronica, Cole, Austin, Laurentee, Samuel, Timothy; great-grandson, Miles, brothers Joseph (Carol), Arthur Eugene, his sisters Josephine Utley, Edith Ricks, and a host of nieces and nephews. Visitation 6- 8 pm Tues. July 27, 2021 at the Lewis Funeral Home, 78 E. Main St. Moorestown, NJ Mass of Christian burial 10:30 am Wed. 7/28/2021 at Our Lady of Good Counsel Church,42 W. Main St. Moorestown, NJ. Interment Lakeview Memorial Park, Cinnaminson, NJ. In lieu of flowers, the family is accepting donations to the W. Edward Armstead, Jr. Scholarship which is awarded to a MHS senior pursuing a college degree in science or technology. Contact Joann Armstead Foster at [email protected] for details

Send flowers to the Armstead family.