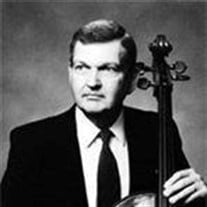 Memorial Service : Sunday April 12th 2015 at 2:30 pm at the Unitarian Universalist Church 401 Kings Highway North Cherry Hill, NJ 08003 Memorial Concert Saturday May 9th 2015 at 3 Pm at Curtis Institute of Music- Field Concert Hall 1726 Locust Street Phila. Pa. 19103 William Stokking, retired principal cellist of the Philadelphia Orchestra, of Medford, N.J. on Sunday, Dec. 14. Son of the late William and Thyra Stokking of Ventnor, NJ. Survived by wife Nancy (Leichner) and their two sons, Kristoffer (Margaret Thorpe) of Pasadena, Md. and Carl, and also survived by his first wife Nancy Perry-Stokking and their three daughters, Lisa Lutwyche (Nicholas) of Landenberg, Pa., Laura (James Aquiar) of Pine Valley, Ca. and Lynn of Woodstown, NJ. Also grandchildren John Stokking Strekis, Whitney Newswanger, Garrett Newswanger and Maximus Stokking. Bill studied with Gregor Piatigorsky at the Curtis Institute of Music and Felix Salmond and Leonard Rose at the Juilliard School of Music. At the outbreak of the Korean War he enlisted in the Navy and became solo cellist with the Navy Band and Orchestra in Washington, DC. He first joined the Philadelphia Orchestra in 1960 under Eugene Ormandy where he played for six years before leaving to play principal with the Chamber Symphony of Philadelphia. Upon their demise he played with the Boston Symphony, and then went on to the Cleveland Orchestra, under George Szell, where he was principal cellist. He returned to the Philadelphia Orchestra in 1973 as principal cellist, and remained a lively spirit and passionately dedicated member until his retirement in 2005. He was on the faculty of the Cleveland Institute of Music during his tenure there, and joined the Curtis Institute faculty in 2000. When he wasn't behind the cello, Bill could often be found behind the controls of his Beechcraft Muskateer, taking friends and family on flights both near and far. Having grown up in Ventnor, NJ, Bill was also an avid boater. He had a passion for both sailing and power boats, spending countless hours on New Jersey, Delaware River and Chesapeake Bay waterways. He and his wife founded the Serenade for Wildlife, a major annual fundraiser for the Woodford Cedar Run Wildlife Refuge in Medford, NJ. A memorial service in Bill’s memory will be scheduled at a later date. In Lieu of Flowers Memorial contributions maybe made to: Philadelphia Orchestra: One South Broad Street, 14th Floor Philadelphia, PA 19107 https://www.philorch.org/support/ Woodfords Cedar Run Wildlife Refuge: 4 Sawmill Road Medford, NJ 08057 http://www.cedarrun.org/content/get_involved/donate.asp

The family of William Stokking created this Life Tributes page to make it easy to share your memories.

Send flowers to the Stokking family.