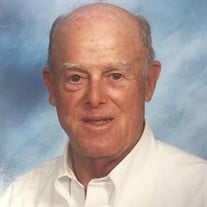 Wilson Greenwood, 92, of Moorestown, died peacefully at home on May 12, 2015. He was the devoted husband of Rachel Ann Bitzer for 58 years. She died in 2007. Living in Moorestown since his parents Horace, Cora and their five sons moved there in 1928, he was a 1941 graduate of Moorestown Friends School. He was a member of Trinity Episcopal Church, a member for over 80 years and twice President of the Moorestown Field Club, a member of Pine Valley Golf Club and for 10 years, a volunteer with the Moorestown Emergency Squad. Certified as an EMT from 1985 to 1995, he responded to radio calls from his home on Sunday nights. After three semesters at the University of Pennsylvania he entered the Army Air Corps serving as a radioman on transport planes in the Pacific. Returning to Penn, he was president of his fraternity and captain of his Ivy League champion soccer team. After graduating from the Wharton School, he joined the family textile business, retiring in 1990 as President of Globe Dye Works Company. He was a past President of the Northeast Philadelphia Chamber of Commerce and a member of the Northeast Advisory Board of Philadelphia National Bank. A man of many parts, he appreciated the countless friends he made in his business life, the annual road trips to Florida, always returning in time to enjoy the spring, summers on LBI with the 52nd Street Gang, and being on the waterways of South Jersey, fishing or just exploring and soaking up the sun with his first mate. He was dedicated to his family and is lovingly remembered by them all, including, his son Bill, wife Debby and their sons Daniel, and Philip; his son Peter, wife Beverly, their son Kyle, his wife Megan and their children Kayleigh and Kylie, and their son Ryan, his wife Jessica and their children Casey, Karyme and Tyler. Also, his son Craig, wife Anne, and their daughters Abigail and Samantha, and his son Paul. He is also survived by his brother Sydney Greenwood and several cousins, sisters-in law, nephews, nieces and their children. A memorial service will be held at Trinity Church , 207 W. Main Street Moorestown, NJ 08057 on May 21 at 1:00 PM., with interment next to his wife in the church’s Memorial Garden.

Wilson Greenwood, 92, of Moorestown, died peacefully at home on May 12, 2015. He was the devoted husband of Rachel Ann Bitzer for 58 years. She died in 2007. Living in Moorestown since his parents Horace, Cora and their five sons moved there... View Obituary & Service Information

The family of Wilson Greenwood Sr created this Life Tributes page to make it easy to share your memories.

Send flowers to the Greenwood family.