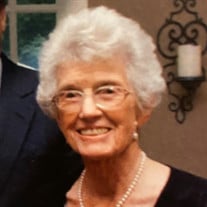 Joan Rogers McKeon died peacefully with her family at the Samaritan Hospice in Voorhees on May 22, 2020. She was born to Donald and Esther Rogers of Moorestown on November 30, 1926. The Rogers family was one of the earliest Quaker families to settle in the area. She grew up in Moorestown, New Jersey and graduated from Moorestown Friends School in 1944 and Smith College in 1948. While at Smith she met Jack McKeon. They were married in Moorestown in 1948. Until 1962, they lived on Long Island. Joan then returned with her family to her hometown. Joan spent the first years of her marriage as a housewife and mother to her four children, John, Lucy, Amy and Tom. She yearned to do more. When the last of the children reached school, she returned to school for a Master’s degree in library science at Drexel University. Joan was the children’s librarian in Moorestown for over 20 years. She nurtured a love of reading in many of Moorestown’s children, who remember her reading clubs, films, craft programs and summer programs at the library. While living and raising their children in Moorestown, Joan and Jack made many friends. Their swimming pool was a gathering place for neighborhood families. Joan was active in many organizations including the Trinity Episcopal Church, the Moorestown Field Club and the Moorestown Garden Club. Throughout her life, she was a devoted caregiver to Jack and the children. After Joan and Jack retired, Joan had many pursuits. Joan and Jack enjoyed time in Nantucket and Vero Beach. Ultimately, they moved to Medford Leas where they lived out their final chapter. Joan was known for her warmth, quick wit and sharp intelligence. She was also highly competent and dedicated to her many pursuits, all of which engaged her relentless focus on getting things right and her precise eye for detail. One of her passions was gardening. The McKeon house was always noted for its extensive gardens requiring Joan to suffer through footballs, running children, insects, groundhogs, dogs, and rabbits to maintain a beautiful array of flowers. She maintained the tradition until this spring, including community and table top gardens at Medford Leas and a vibrant patio. She had plans for her balcony at Medford Leas this year had the virus not cut off her access to the garden store. Her love of flowers and intense attention to detail fueled a very successful career competing in flower shows. Joan was also a great lover of literature, film and edgy TV series. As it became harder to read, she became a devoted streamer of movies and TV shows. She wrote and published crossword puzzles for the Sunday New York Times. She wrote a history of the Trinity Church. Many birthdays, retirements, and other events featured one of Joan’s poems about the subject of the party. She was active with the Medford Leas literary journal. The family appreciates the devoted care and support Joan received from the staff at Medford Leas and the attention from longtime family friend Paula Moss. Joan missed husband Jack, her son John and her daughter Amy dearly. She is survived by Lucy McKeon and Brad Armstrong of Cornwall, VT; Tom McKeon and Mary Whited of Falmouth, Maine; and Scott Wallace of Moorestown. She is also survived by six grandchildren and their families, who she loved and enjoyed. Kai Armstrong, Claire Armstrong, Jamie Wallace and Kristin Li, Dan Wallace and his companion Claire Lieberman, Maggie McKeon and her fiancé Paul Friedman, and Caroline McKeon. She also got to know and enjoy her great grandson Charlie. Given the current circumstances, any Memorial Service will be delayed. Donations in Joan’s memory may be made to the John H. McKeon Jr. Scholarship at Moorestown Friends School, 110 East Main St. Moorestown NJ 08057.

Joan Rogers McKeon died peacefully with her family at the Samaritan Hospice in Voorhees on May 22, 2020. She was born to Donald and Esther Rogers of Moorestown on November 30, 1926. The Rogers family was one of the earliest Quaker families... View Obituary & Service Information

The family of Joan R McKeon created this Life Tributes page to make it easy to share your memories.

Joan Rogers McKeon died peacefully with her family at the Samaritan...

Send flowers to the McKeon family.